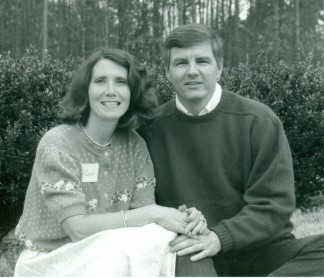 Kit and Drew during their first visit to FamilyLife

As many of you have heard, a couple of weeks ago FamilyLife made a surprise announcement that they would move from Little Rock to Orlando, Florida. Nearly all the staff need to decide whether they will move or look for a new job. Kit and I–being “full-time volunteers” rather than employees–are less affected than most. We won’t move to Florida. Still we have been dramatically affected. The major training in Little Rock we would have led this fall has been cancelled. Our October trip to Asia had already been cancelled. In an eye blink, we went from 40+ hours a week invested in FamilyLife to much less than 40 minutes a week.

What a difference in our schedule! For the first time in years, I remember how vacation feels. Still some reminiscing is unavoidable. In September of 1989–thirty years ago–we started the ministry of FamilyLife in our area of South Carolina. The picture of us is our first visit to FamilyLife in Little Rock. Since then we’ve been part of many wonderful things God has done. I think our Lord understands a little sadness at the end of the major era of our lives.

But is it an end or the beginning of an era? FamilyLife’s president, David Robbins, has asked us to meet with him. Maybe after all the turmoil has settled down, FamilyLife will still need us to train and coach couples using the lessons we learned in South Carolina and around the world. We’ll see. Regardless we had a meaningful and adventurous thirty years. And we still have plenty to do maintaining our farm and our non-FamilyLife writing career.

We thank God for the ability to embrace change. Maybe it has something to do with faith. Whatever happens, we expect it to be good.

Behold, I will do something new. Now it will spring forth; Will you not be aware of it?
Isaiah 43:19 (NASB)