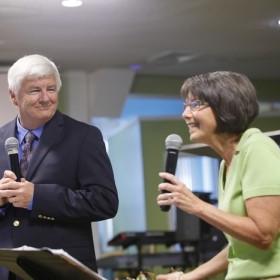 Two prominent Christian leaders at a missionary conference gave diametrically opposed interpretations of scripture. I expected the conference would be abuzz with controversy. But it wasn’t. To my astonishment, nobody I spoke to had noticed. Many extolled both speakers for their powerful presentations.

Two years later I served in a planning group with one of those speakers. Thinking that I could have been mistaken, I reminded him of the conference and asked, “Did the other man contradict you?”

He sighed. “Yes, he did.” And he sincerely thanked me for noticing.

I’ve since discovered that many people confuse the tone and delivery of a message with the content. Frequently they enjoy the presentation without being able to explain what it was about. But the fault is not all on the hearers. Speakers with willing listeners have a responsibility to communicate however necessary to be understood.

For the last ten years Kit and I have been teaching leaders all over the world how to effectively communicate God’s truth. In May, we’ll lead a similar training at FamilyLife for the third time.

Everybody knows that communicating effectively is also a requirement for a good marriage. We’ve been privileged to share biblical principles for marriage all over America. We would love to serve you by leading a seminar or retreat.