Eat Your Fish and Have It, Too 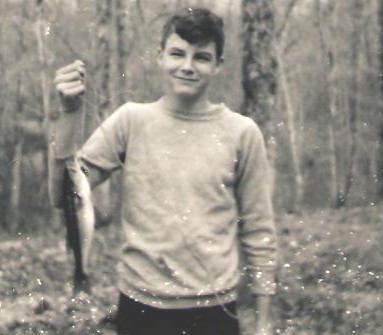 The following story by Drew was first published in Arkansas Wildlife magazine in January, 2014.

My sixteenth summer was all about fish. That is, catching fish. While other boys spent their teenage summers earning money or playing baseball, I was chasing fish. Largemouth bass, bluegills, catfish, sunfish, and red eyes were in my dreams awake or sleeping. But, mostly the dreams were about bass. My fishing tutors, outdoor sports magazines, glorified bass.  And I became very good at catching the largemouths. Fish passion had even brought me fame and prizes by winning the Boy Scout Fishing Jamboree.

Fortunately, my widowed mother owned an isolated cabin on a little river. On school nights, we stayed in town. But, the cabin was home. The clear and cold river was walled in green by big trees. In places, the running water was shallow enough to wade across or catch large crayfish. A mile below the cabin a 15-foot dam for an old grist mill backed up the river into a serpentine lake. You could still see the big mill stones, which before electricity had ground the local farmers’ corn. In a little aluminum boat, I used rod and reel and trot lines to pull a lot of fish from that lake. Nearly every fish is released on today’s TV fishing shows. But, in those days, when you caught a fish, you ate it. And no fish tastes better than a bass. The white tender flesh of a young bass simply can’t be matched.

Even with the lake, my greatest joy was fishing up the river. Wading stealthily upstream in a pair of old sneakers and cut off blue jeans did not alert most fish to my coming. Then delicately casting an artificial lure above a ripple, by a log, or in a pocket where fish might wait is a skill created by many hours of diligence. For some, the pleasure of practicing that art actually surpasses catching the fish. But, not quite for a 16-year-old boy.

Early that spring a strong fish had grabbed my lure by a bed of water plants. To my utter amazement, a beautiful tawny bronze fish erupted from the water jumping nearly a yard in the air. It was a smallmouth bass, the most elegant of all fighters according to every outdoor magazine. I’d never seen one so large. Nor have I ever seen a larger one. The picture of that fish hanging in the air twisting violently remains in my mind. And the memory of my lure shaken free and coming back at me at that moment remains as well.

Every day all summer I chased that smallmouth bass on the river. Hooked it briefly once or twice. I even resorted to using live crayfish trying to trick that fish. But mostly, I just spooked it when I waded near. The smallmouth had learned who I was and what I wanted.

Then the summer was over. Fall was finished as well. Even the fish had called it a year.   And I instinctively knew that was to be my last summer of freedom on the river. The next summer I would be at the university. There I would engage in the serious business of making something of my life, and perhaps not disappoint my family and teachers. Near dark in the chilly December twilight, I went down to the river bank. Mostly, it was just to feel the rod in my hands and to hear the water. These were the last casts, in the last days of boyhood. The only spot with enough light remaining to cast was were no fish had ever been before. To my surprise, a big fish grabbed the lure. After a minute of tussle, the smallmouth was in my hands.

Eating it was immediately on my mind. Then a voice said in my head, “Let this one go. For the rest of your life, you can enjoy the thought of this fish and its descendants alive and free in this river.”  But, youthful passions being what they are, the thought of tasting it’s sweet flesh was too much to give up.   I killed, cooked, and ate the smallmouth. Before the dishes were cleaned, there was sorrow. My worthy adversary was gone forever. For a moment of pleasure, I had taken on a lifetime of regret.

One fish is a small price for a teenager to learn such a powerful lesson before leaving home for college and an adventurous life. The wisdom to make careful decisions is worth any fish. That fish helped to make me who I am. For those reasons, I no longer regret eating the smallmouth. Still, it would be wonderful to think of the smallmouth there in the river. I’m a much older man now. My fingers fumble with fisherman’s knots. My eyes squint to bait a hook. Keeping balanced on the slippery river rocks would be impossible. Yet, my heart will always have that summer on the river. I’ve caught many other fish in my lifetime. Most of them, I’ve let go.

2 Responses to Eat Your Fish and Have It, Too